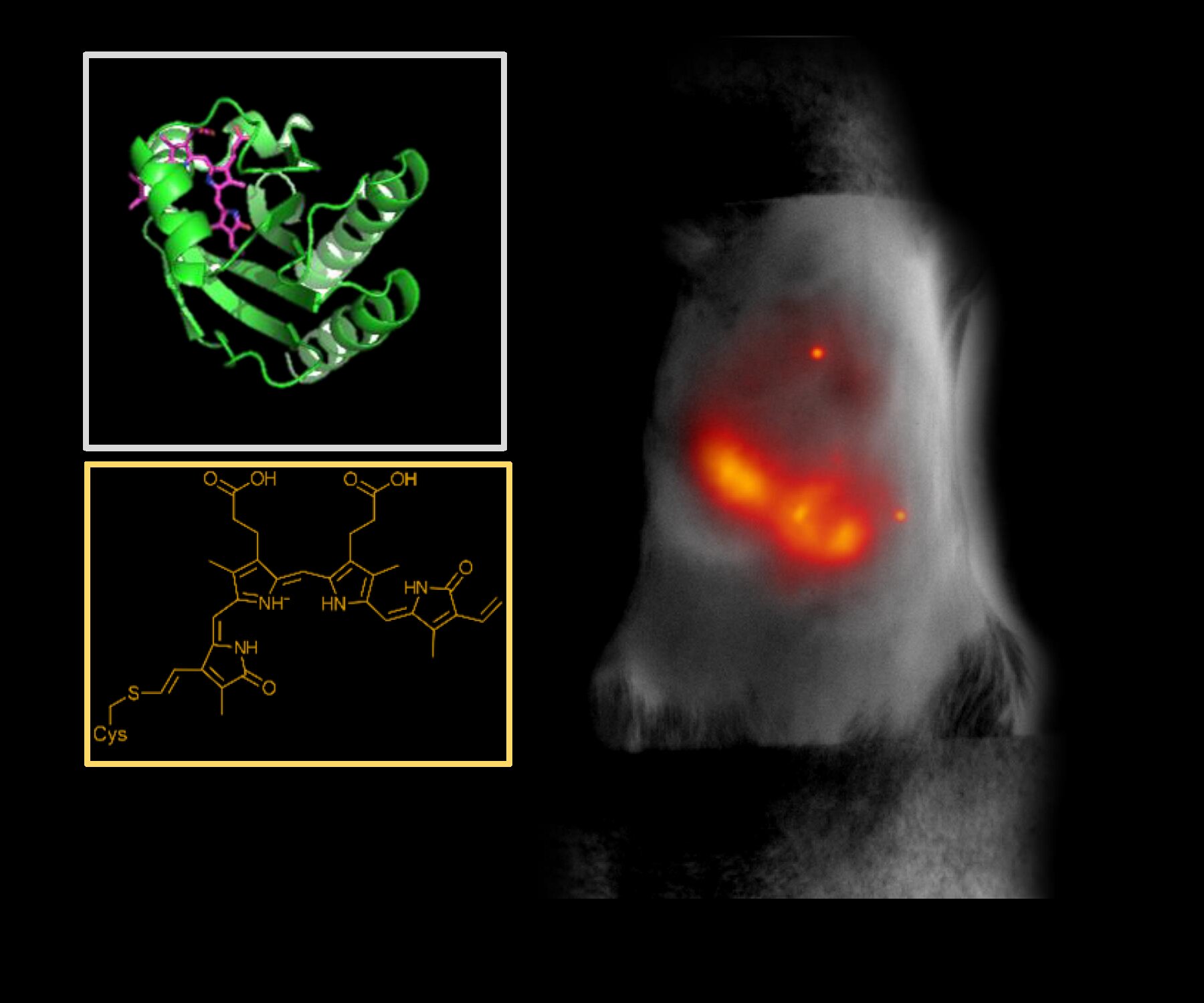 Biomedical and genetic engineers at Duke University and the Albert Einstein College of Medicine have designed a small fluorescent protein that emits and absorbs light that penetrates deep into biological tissue. Tailored to wavelengths in the near-infrared (NIR) spectrum, this protein can help researchers capture deeper, cleaner, more precise biomedical images.

This work appeared Dec. 1 in the journal Nature Methods.

Imaging deep tissues with light is challenging. Visible light is often quickly absorbed and scattered by structures and molecules in the body, preventing researchers from seeing deeper than a millimeter within a tissue. If they do manage to probe further, substances like collagen or melanin often muddy the image, creating the equivalent of background noise through their natural fluorescence.

“Biological molecules naturally absorb and emit light in the visible spectrum, which is about 350 to 700 nanometers,” said Junjie Yao, assistant professor of biomedical engineering at Duke. “So when using it to image deep tissue, it’s like trying to observe the stars in daylight. The signals get flooded out.”

To wade out from these muddied waters, Yao and his collaborator Vladislav Verkhusha, professor of genetics at Albert Einstein College of Medicine, New York developed a protein that absorbs and emits longer wavelengths of light in the near-infrared (NIR) spectrum.

“Tissue is the most transparent in the 700-1300 nanometer window of NIR light,” said Yao. “At those wavelengths, light can penetrate deeper into a tissue, and because there is less natural background fluorescence to filter out, we can take longer exposures and capture clearer images.”

Verkhusha and his lab used a process called directed molecular evolution to engineer their proteins, using photoreceptors normally found in bacteria as the basis for the structure. These photoreceptors are useful for imaging research because they can switch between a silent and active state when hit with a specific wavelength of light. They can bind with biliverdin, a biomolecule that appears in high quantities in mammalian and human tissues.

“We studied the structure of the biliverdin to determine how the photoreceptor would best attach to the biomolecule,” explained Verkhusha. “After we understood the binding process, we carefully introduced substitutions of key parts of the molecule connecting to the biliverdin to increase the electron binding, which is necessary to obtain the red-shifted fluorescence. Last, we performed random mutagenesis followed by high-throughput screenings so the proteins would evolve and increase their brightness.”

The brightest found protein, termed miRFP718nano, is easily produced in cells and tissues and emits light just outside of the visible range. But while the NIR activation itself is helpful, what happens after the initial burst of activity holds even more promise for biomedical imaging.

“We’ve seen that the NIR range can be broken up into two main zones,” explained Yao. “When NIR light first hit these proteins, they emit light in the first zone, which is about 700-900 nanometers. But as they decay, the wavelength gradually gets longer, like the tail behind a comet. That’s when they begin to emit light in the second NIR zone, which is from 900-1300 nanometers.”

In this second zone, all benefits from using the shorter wavelength, zone one NIR light are enhanced: light can penetrate tissue two times deeper, background fluorescence is significantly dimmed, and image resolution can be two to three times clearer, allowing for detailed images of complex structures.

As a proof of concept, Yao and his team at Duke used an imaging technique called short-wavelength infrared (SWIR) to test the efficacy of the new protein. This process sends NIR zone-one light deep into the tissue to activate the fluorescent proteins. As the proteins decay, they emit NIR zone-two light that provides information about the structure and composition of the targeted tissues and cells that can be translated into high-resolution images.

After introducing engineered miRFP718nano proteins into their animal models, the team used them to capture images of microbes in the mouse digestive tract, visualize cells in a mouse mammary gland and even track changes to inflammation in a mouse liver. All the images captured were clearer and more detailed than images made using a standard NIR zone-one imaging protein.

Yao and Verkhusha are optimistic that their continued partnership will be a boon for their work in both biomedical imaging and protein engineering. As Verkhusha continues to refine and improve the fluorescent proteins and biosensors, Yao is excited to use the new tool to visualize the brain more closely and to potentially track the movement of cancer cells.