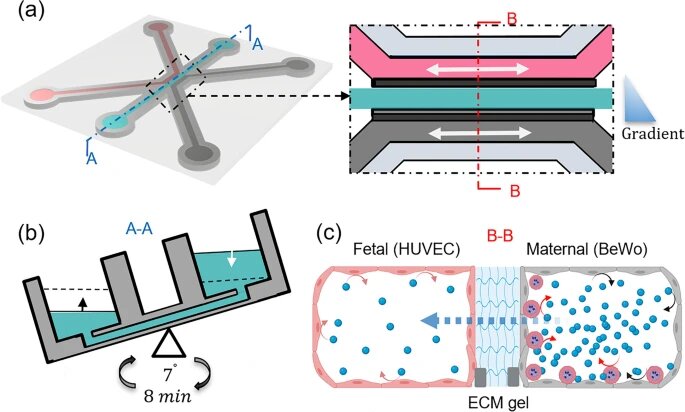 Placental malaria as a consequence of Plasmodium falciparum infections can lead to severe complications for both mother and child. Each year, placental malaria causes nearly 200,000 newborn deaths, mainly due to low birth weight, as well as 10,000 maternal deaths. Placental malaria results from parasite-infected red blood cells that get stuck within tree-like branch structures that make up the placenta.

Research on human placenta is experimentally challenging due to ethical considerations and inaccessibility of the living organs. The anatomy of the human placenta and architecture of maternal–fetal interface, such as between maternal and fetal blood, are complex and cannot be easily reconstructed in their entirety using modern in vitro models.

Researchers from Florida Atlantic University’s College of Engineering and Computer Science and Schmidt College of Medicine have developed a placenta-on-a-chip model that mimics the nutrient exchange between the fetus and mother under the influence of placental malaria. Combining microbiology with engineering technologies, this novel 3D model uses a single microfluidic chip to study the complicated processes that take place in malaria-infected placenta as well as other placenta-related diseases and pathologies.

Placenta-on-a-chip simulates blood flow and mimics the microenvironment of the malaria-infected placenta in this flow condition. Using this method, researchers closely examine the process that takes place as the infected red blood cells interact with the placental vasculature. This microdevice enables them to measure the glucose diffusion across the modeled placental barrier and the effects of blood infected with a P. falciparum line that can adhere to the surface of placenta using placenta-expressed molecule called CSA.

For the study, trophoblasts or outer layer cells of the placenta and human umbilical vein endothelial cells were cultured on the opposite sides of an extracellular matrix gel in a compartmental microfluidic system, forming a physiological barrier between the co-flow tubular structure to mimic a simplified maternal–fetal interface in placental villi.

Results, published in Scientific Reports, demonstrated that CSA-binding infected erythrocytes added resistance to the simulated placental barrier for glucose perfusion and decreased the glucose transfer across this barrier. The comparison between the glucose transport rate across the placental barrier in conditions when uninfected or P. falciparum infected blood flows on outer layer cells helps to better understand this important aspect of placental malaria pathology and could potentially be used as a model to study ways to treat placental malaria.

“Despite advances in biosensing and live cell imaging, interpreting transport across the placental barrier remains challenging. This is because placental nutrient transport is a complex problem that involves multiple cell types, multi-layer structures, as well as coupling between cell consumption and diffusion across the placental barrier,” said Sarah E. Du, Ph.D., senior author and an associate professor in FAU’s Department of Ocean and Mechanical Engineering. “Our technology supports formation of microengineered placental barriers and mimics blood circulations, which provides alternative approaches for testing and screening.”

Most of the molecular exchange between maternal and fetal blood occurs in the branching tree-like structures called villous trees. Because placental malaria may start only after the beginning of second trimester when intervillous space opens to infected red blood cells and white blood cells, the researchers were interested in the placental model of maternal–fetal interface formed in the second half of pregnancy.

“This study provides vital information on the exchange of nutrients between mother and fetus affected by malaria,” said Stella Batalama, Ph.D., dean, FAU College of Engineering and Computer Science. “Studying the molecular transport between maternal and fetal compartments may help to understand some of the pathophysiological mechanisms in placental malaria. Importantly, this novel microfluidic device developed by our researchers at Florida Atlantic University could serve as a model for other placenta-relevant diseases.”

Placenta-on-a-chip: Microsensor simulates malaria in the womb to develop treatments