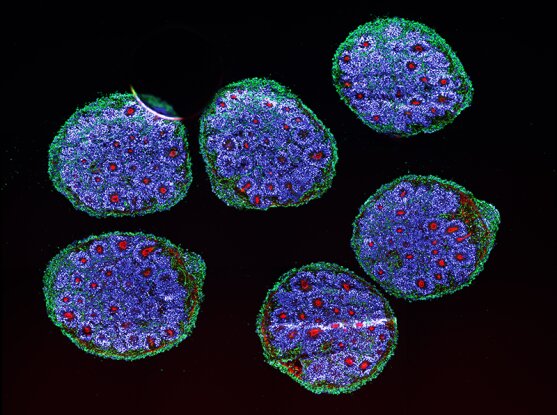 Organoids are carefully grown collections of cells in a dish, designed to mimic organ structures and composition better than conventional cell cultures and give researchers a unique view into how organs such as the brain grow and develop. To make them experimentally useful, scientists need to determine how faithfully these models reproduce the behavior of cells in the body.

Now, researchers at the Broad Institute of MIT and Harvard and Harvard University have found that human brain organoids replicate many important cellular and molecular events of the developing human cortex, the part of the brain responsible for movement, perception, and thought. Their findings appear today in Cell.

The team grew brain organoids from stem cells and closely studied their growth over a six-month period, using tools that map cell position, gene expression, and chromatin accessibility—which determines how gene activity is regulated—at a single-cell level and over time. They then constructed an “atlas” characterizing more than 600,000 cells from organoids that were sampled as they developed and matured. The team found that after the first month, in each organoid they made, the same types of cells developed in the same order and expressed the same genes as cells in the developing human embryo.

“This was very important for us to prove,” said Paola Arlotta, senior author of the study, institute member at the Broad, associate member of the Stanley Center for Psychiatric Research at Broad, and the Golub Family Professor of Stem Cell and Regenerative Biology at Harvard University. “This tells us that we can use these human brain organoids to study processes of human brain development that otherwise we would never be able to study.”

The researchers were also able to identify gene expression patterns and other key developmental factors that are unique to humans. They suggest that because these organoids are reasonably accurate models of early brain development and can be grown in relatively large numbers in the lab from just a small pool of stem cells, these models could help accelerate research on brain health and neurodevelopmental disorders.

“The field has spent—and will continue to spend—so much time developing better, more reliable, easier-to-grow human brain organoids,” Arlotta said. “Now we’ve shown that we’ve gotten to a point where they’re good enough to study some biological processes of the human cerebral cortex. And that will move the field towards a deeper understanding of how our brain is made and what makes it special.”

Organoids are particularly useful for studying human development, where standard approaches used to study other animals can’t be used. But some scientists have previously questioned whether a brain organoid’s culture dish could serve as a realistic stand-in for the complex milieu of the human brain. Indeed, organoids, much like other cells grown in culture in the lab, can easily be stressed and therefore poor models for physiological processes.

However, Arlotta’s lab and other groups have shown in recent years how brain organoids can recapitulate many features of the developing human brain. In their latest study, Arlotta’s team used single-cell RNA sequencing to analyze gene expression in individual cells and found that the same genes were active in the organoids and in previously studied fetal tissue. Only two kinds of cells among the many in the organoids showed increased activity of genes associated with metabolic stress, possibly reflecting lack of oxygen towards the center of the organoids. This effect, however, did not change the types of cells in the organoids, suggesting that the metabolic state of the models did not significantly alter them.

“This is an important step forward,” said Amanda Kedaigle, co-first author on the study and a computational scientist in the labs of Paola Arlotta and Joshua Levin, a senior group leader in the Stanley Center for Psychiatric Research and Klarman Cell Observatory at the Broad, and collaborator on the work. “Abnormal cellular metabolism is a powerful barrier to the use of organoids in research.”

The team used the gene expression data to build a “tree of life” of cells in the organoids as they differentiated, showing how stem cells became glial cells or neurons, for example, and then branched into subtypes of these cells. By comparing this tree to its counterpart in mice, the researchers found gene expression patterns and transcription factors—regulators of gene activity—that were unique to humans. They identified genes that may help determine how cell lineages are established in humans, and plan to study the functions of those genes next.

The researchers also analyzed early stages of development that typically only occur in the womb. They observed that a type of cell called callosal projection neurons, which have a larger variety of subtypes in adult humans than in mice, were already becoming diverse even at these early stages. These cells are more abundant in humans than in other species, and have contributed to the expansion of the cortex during human evolution. Scientists have long wondered how and when these special cells arise and differentiate in the human brain.

“Now that we have these organoids that are validated to go through this process of forming callosal neurons, we can now dig into all these questions about their origin we always had and never could answer,” said Ana Lopez Uzquiano, co-first author on the study and a postdoctoral researcher in Arlotta’s lab.

In the meantime, the team has already begun extending their analysis to study organoids that have been growing for several years in the lab, offering a glimpse into later periods of development. They’re also working on new brain organoid models. Ultimately, Arlotta’s team hopes to use stem cells from patients to create reliable, personalized organoids in which scientists could test potential drugs and predict a patient’s response.

“We—like many others—are constantly improving these organoids,” Arlotta said. “I always joke that by the time we finish a paper, we already have another model with better features. And this is what should happen in science. You keep on moving forward.”

Brain organoids provide insights into the evolution of the human brain

Provided by
Broad Institute of MIT and Harvard