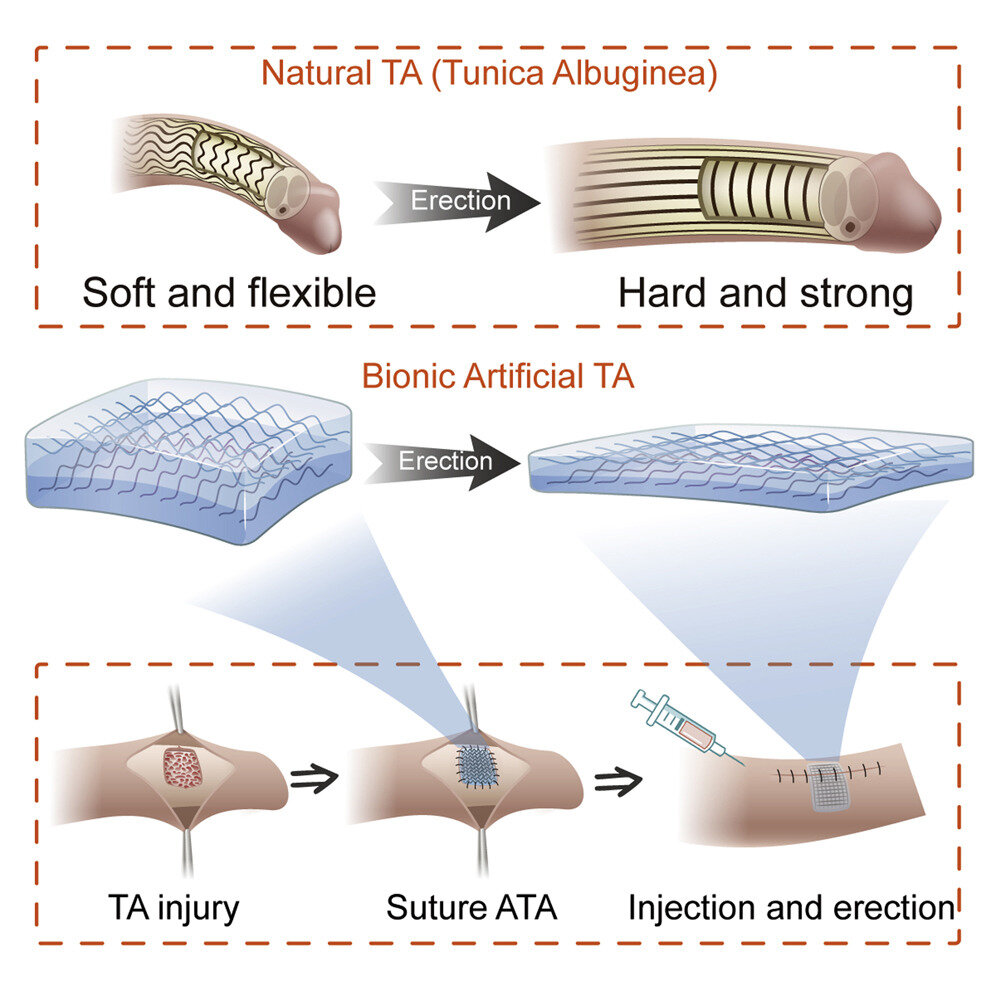 Scientists have developed a synthetic tissue that repairs injuries and restores normal erectile function in a pig model, in a study publishing January 4 in the journal Matter. The findings suggest that the artificial tunica albuginea (ATA), which mimics a fibrous sheath of tissue necessary to maintain erections, shows promise for repairing penile injuries in humans.

“We largely foresaw the problems and results of the ATA construction process, but we were still surprised by the results in the animal experiments, where the penis regained normal erection immediately after the use of ATA,” said Xuetao Shi, a researcher at the South China University of Technology in Guangzhou, China, and an author of the study.

“The greatest advantage of the ATA we report is that it achieves tissue-like functions by mimicking the microstructure of natural tissues,” he added. “This design approach is not limited to the biomimetic design of tunica albuginea tissues but can be extended to many other load-bearing tissues.”

Shi said that his team’s research focus has recently turned to producing biomaterials to address issues in male reproductive health, including erectile dysfunction, infertility, and Peyronie’s disease, a connective tissue disorder thought to occur as a result of injury from sex. About half of men between the ages of 40 and 70 reportedly experience some form of erectile dysfunction, while an estimated 5% suffer from Peyronie’s disease, in which scar tissue forms in the tunica albuginea, causing pain and a range of other effects.

“We noticed that this is an area that has received little attention, yet the related need is huge,” said Shi.

While many previous studies have focused on repairing the urethra, Shi said that less research has focused on restoring erectile function. And although clinicians can treat patients with damaged tunica albuginea tissue by making patches from other tissues in the patient’s body combined with extracellular matrix, these patches come with disadvantages. Sometimes, the immune system rejects them or complications occur at the donor site, and since their microstructures are different from that of natural tunica albuginea, it is difficult for these patches to replace the natural tissue perfectly.

To address this issue, Shi and colleagues developed ATA based on polyvinyl alcohol, which has a curled fiber structure similar to that of the natural tissue. As a result, the synthetic material has biomechanical properties that mimic those of tunica albuginea. The researchers performed laboratory experiments to investigate the artificial tissue’s toxicity and blood compatibility, since it is designed to remain in the body for a long time, and determined that it should not be harmful to other tissues.

Next, they tested the ATA in Bama miniature pigs with injuries to the tunica albuginea. The researchers found that patches made from the artificial tissue restored erectile function such that it was similar to that of normal penile tissue, suggesting the patch successfully replaced the natural tissues’ function. The researchers analyzed the effect of the ATA patches after one month, finding that while the artificial tissue did not restore the microstructure of surrounding natural tissue, it developed fibrosis comparable to that in normal tissue and achieved a normal erection after the penis was injected with saline.

“The results one month after the procedure showed that the ATA group achieved good, though not perfect, repair results,” said Shi.

Shi noted that in penile injuries the tunica albuginea is usually not the only tissue damaged. Surrounding nerves and the corpus cavernosum, the spongy tissue that runs through the penis’ shaft, are often damaged as well, making repairs even more difficult.

“Our work at this stage focuses on the repair of a single tissue in the penis, and the next stage will be to consider the repair of the overall penile defect or the construction of an artificial penis from a holistic perspective,” said Shi.

He added that the researchers also plan to investigate techniques to repair other tissues, including the heart and bladder.