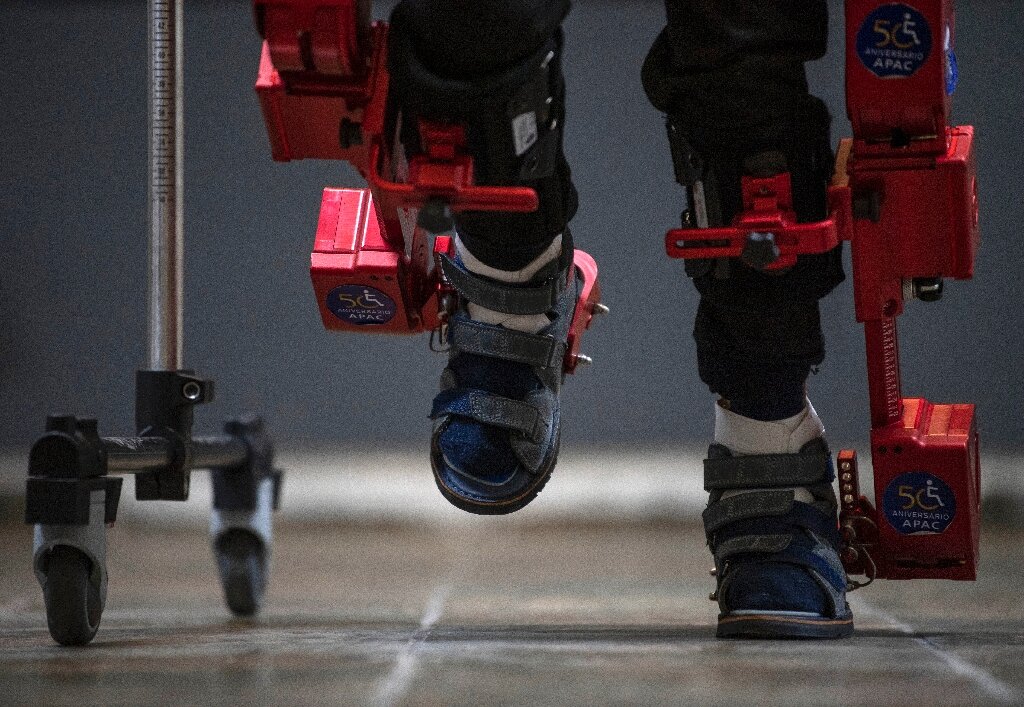 Wearing a robotic exoskeleton designed specially for children, an eight-year-old boy with cerebral palsy walked through a therapy room in Mexico City, smiling triumphantly at the once-unthinkable feat.

David Zabala uses a wheelchair due to his neurological condition, which also left him deaf and reliant on sign language.

But thanks to the Atlas 2030 exoskeleton, which won its creator a European Inventor Award this year, he was able to walk and stand in front of a mirror where he drew smiling faces with colored marker pens.

“He’s taking his first steps. That’s a joy for him,” said the boy’s mother, Guadalupe Cardoso, 41.

“At first it scared him and his hands were very tense, and now I see that he’s already holding the marker pen and starting to draw or (play with) the ball,” Cardoso added.

It makes the exhausting, near two-hour journey from their home in the south of Mexico City to the therapy center totally worth it, she said.

The exoskeleton was designed by Spanish professor Elena Garcia Armada to enable children who use wheelchairs to walk during muscle rehabilitation therapy.

The mechanical joints of the battery-powered titanium suit adapt intelligently to the motion of each child, according to the European Patent Office, which presented Garcia with the European Inventor Award.

Giving paralyzed children the opportunity to walk “not only extends their life expectancy and enhances their physical well-being, but also improves their self-esteem,” it said.

Mexico is the third country, after Spain and France, where the Atlas 2030 has been used to treat children.

The suit helps “to achieve in record time rehabilitation goals” that would take months to achieve with conventional therapies, said Guadalupe Maldonado, director of Mexico’s Association for People with Cerebral Palsy.

The private organization, founded in 1970, has already seen positive results two weeks after acquiring its first exoskeleton, she said.

The association’s initial goal is to offer rehabilitation to about 200 children with cerebral palsy.

“We want to continue working and empowering, so that more children in the city and the country have access to this type of rehabilitation… that radically changes their lives,” Maldonado said.

The sessions also give joy to the therapists, who carefully fit the exoskeleton using its special corset, cuff and shoes and celebrate the children’s progress with smiles and applause.

“It motivates us a lot as therapists that we will be able to achieve many things in the future,” said Arturo Palafox, 28.